THE LITTLE STORY OF THE LÉODE

“ In 1986, a motorbike accident deprived me of the use of my left arm(and my guitar!!!). To satisfy my need for sound and music, I explored the world of computer music, synthesizers and recording. However, I still missed my guitar and it was after a dream (I swear it’s true!!!)that the idea came to me of a new type of instrument and so, one morning I got up and I put my idea on paper…During the following week, the hasty sketches became a scale drawing.The name of my imaginary instrument is a mixture of my family name and my first name: Léonetti Claude: Léo…de. My dream was no longer my imagination. By chance, I met Vincent Maury from LAG Innov’art and we worked on my project for two years… The Léode was created in 1995 (yes, in the last century). I say THE Léode ’cause it’s unique(so I’m at the moment the best player of the Léode in the world!!!). In fact the instrument is the improbable mix of a guitar, a synthesizer and a melodic saw (with a piece of wood).The Léode controls a sampler and a multi-effect by midi system.I work on my synthesis or sample sounds,  which I hear all around me. That is why in my sound data, we can find the voice of my dog, my cat or my friend Sylvain, without even recognizing them.We can also hear sounds inspired from the guitar, the Sarangui, the Doudouk, and all string  instruments including a lot of other non-definable sounds. I release the notes by pressing with my right hand. Here, the strings and keys are channels and the fingers move over the smooth surface (roughly speaking , I practise a kind of gliding sport, which is safe and not yet recognized in the Olympic Games!!!).This is only one part of the story of the Léode… the rest I tell with my instrument on stage or on the albums of LAZULI…” 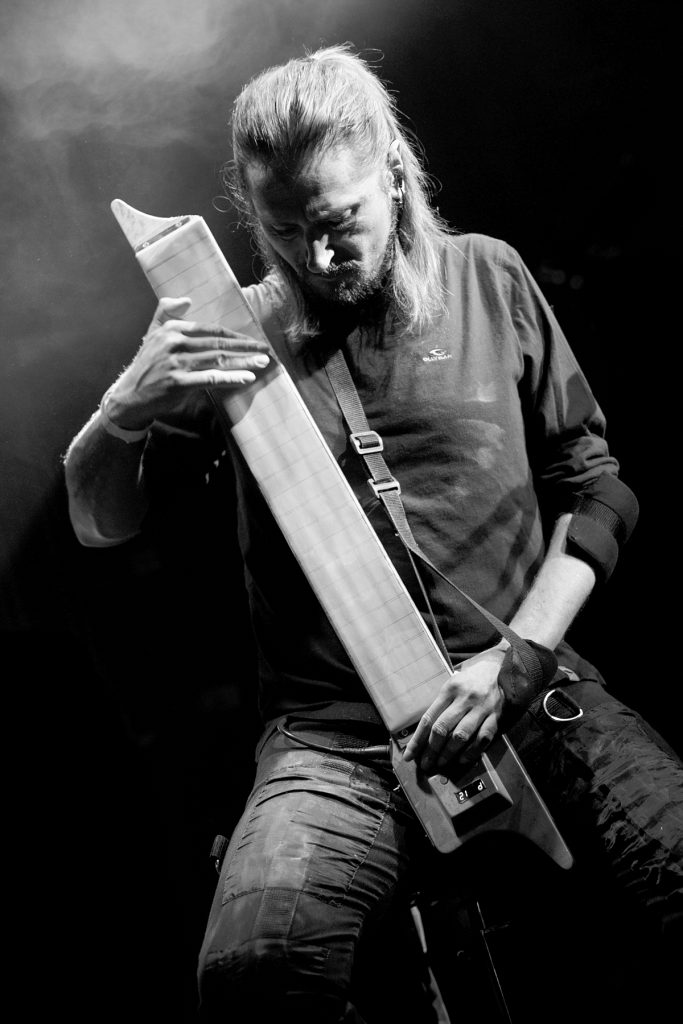